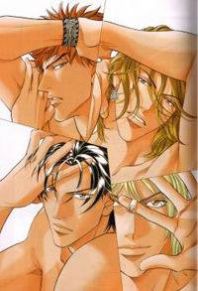 Iwaki and Katou had always been at loggerheads, starting from the first day they met. 30-Something Iwaki had always felt insecure about his age. Being in the adult entertainment industry always meant that the younger you were, the hotter you were. 20-Something Katou was no different. Katou – filled with arrogance, good-looks and charm had never been Iwaki’s favorite. However, with his age as his downside, can Iwaki still continue to be in the adult entertainment industry or can he deviate to something more…glamorous, perhaps?

SIDE NOTE: Even though Iwaki is the seme the first time they have sex, he gladly relinquishes that role to Katou from thereon after, and is happy to play the uke most of the time.

From Be Beautiful:
A lighthearted romantic comedy that lampoons the adult film business, the mainstream media, and the natural vanity of actors while exploring the earliest stages of a brand new relationship.