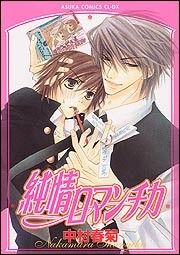 Misaki, struggling to pass his college entrance exams, is in need of a tutor to help pump up his failing grades. Unfortunately, his only option is the cool and sexy Akihiko Usami. Usami happens to be a famous boys’ love novelist, which doesn’t exactly float Misaki’s boat, especially since his main characters are “Akihiko” and “Takahiro,” the name of Misaki’s older brother and Usami’s childhood friend. Understandably, Misaki is pretty disgusted by the thought of someone using his older brother as his personal fantasy-material, but then after some tender loving from Usami, Misaki is also pretty confused. He may even be developing feelings for the older man...And when Takahiro introduces them to his lovely (female) fiancée, so begins the bumpy relationship of this odd couple, filled with comedy and pure romance.