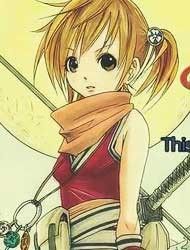 The year is 1590, during the turbulent Sengoku era of Japan. A girl who calls herself Izumi, the sole survivor of the destruction of her village, has come into possession of a set of very powerful keys. These keys can give their wielder access to powerful weapons that could change the course of the era. In her flight from those who want to kill her and take them, she has washed up in a buddhist monastery, where she has met the monk Tenkai. Tenkai, who takes an interest in her troubles, may be more than he appears! Serialization: 10 years after the killing of Oda Nobunaga, allegedly through the betrayal of his follower Akechi Mitsuhide, Nobunaga's 16-year-old daughter is being sent to the current ruler of Japan, the cruel Toyotomi Hideyoshi. En route, she is rescued by two mysterious, powerful monks. Her mistrust of their intentions only deepens when she learns that one of them, who calls himself Tenkai, possesses one of the powerful weapons known as "Sodomu." Tenkai's plans will only become clear when his secrets are revealed! Hopefully, he can show Nobunaga's daughter that the power of "Sodomu" can not only be used for evil but rather for good as well!