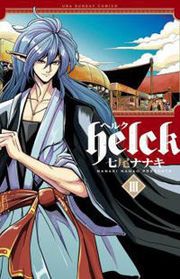 After the last Demon King was defeated, a Demon Kingdom is running a contest to choose the next King. A muscular and high-level human named Helck joined and said that he wants to destroy all human. Is he serious?

Elf "Vamirio", one of the four Great Kings of the whole Demon Empire, cannot believe in this. She is monitoring the contest. The story starts in the Demon Kingdom. What's the secret behind Helck and the human world?